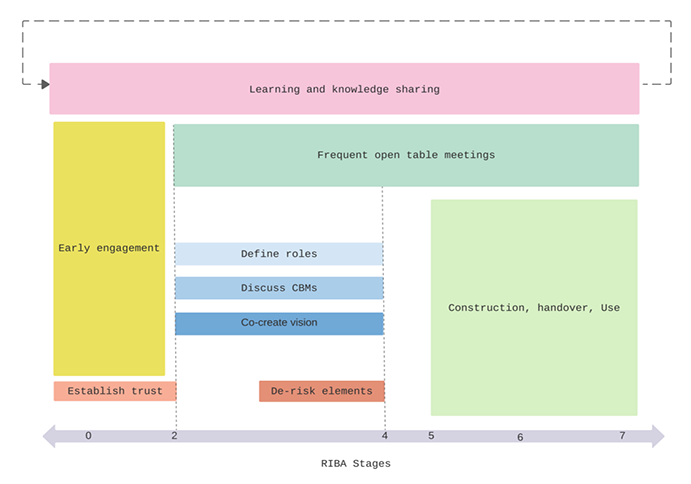 Mapping collaborative actions against the RIBA stages. Produced by author.

This blog is by our Graduate Consultant, Martha Smellie, who recently completed her Masters thesis on “The role of collaboration in slowing the loop in the UK construction industry: Learning from experts”.

The construction industry is the world’s largest consumer of raw materials and accounts for 25-40% of global carbon dioxide emissions. As policy changes at the European and UK government level start to respond to the climate crisis, there is mounting pressure for the industry to change. A paradigm shift to the circular economy offers a proposed solution as it infers a move away from the current ‘take-make-waste’ linear trajectory and suggests a rethink of the system that decouples economic growth with natural resource exploitation. In order to make this transition to the circular economy, collaboration between industry actors throughout the supply chain is required – a challenge for an industry that is widely cited as being fragmented.

How practitioners collaborate is relatively under explored. This research aimed to investigate the collaborative process in relation to empirical examples. This involved engaging with a diverse array of practitioners, each of which have worked on successfully delivered circular projects that have championed ‘slowing the loop’ strategies. Slowing loop strategies involve using less through product life extension, often termed reuse strategies. There is reason to focus on these specific strategies, as there are limits to resource efficiency gains of recycling materials and often the carbon footprint can be worse when recycling – which is the case for concrete, for example. Hence, reuse is the preferred strategy as it retains the highest value of the material for longer.

The research involved 13 semi-structured expert interviews with a range of practitioners involving: clients, architects, researchers and demolition contractors to name a few. The ‘experts’ were chosen by identifying slowing loop case studies from the UKGBC case studies page and using the Mayor of London’s primer and contacting the organisations or relevant individuals who had worked on these projects. For example, 80 Charlotte Street was identified as it reused and retained part of the original façade as well as used prefabricated elements, both slowing loop strategies.

The results indicate that the collaborative process needs to be much more intense for circular construction projects, than traditional linear projects. Communication needs to be initiated earlier, occur more frequently and occur in an open way that allows each actor to deliver their knowledge. Furthermore, the research demonstrated that a common vision, interdisciplinary learning, a change in roles, along with sharing of risk and building of trust are required, whilst further knowledge of circular business models also needs to occur.

The roles of professions and relations to other actors was the most talked about topic for most interviewees. For most, the results proved that all individuals want to be engaged in more informal conversations with the client to discuss or gain approval on new ideas at an early stage. It was mentioned by two experts that it is important to consider the wants and influence of investors and tenants, who typically sit above the client. It was inferred by these actors that recognising the roles of these organisation and even collaborating and educating with them could influence the goals set and ultimately the collaborative process.

Specific enablers and barriers to the collaborative process were identified and analysed. Early engagement was the most frequently mentioned enabler. The principal contractor from 80 Charlotte street mentioned: “There’s a lot of benefits for us getting involved earlier as we can influence the design in a way that helps build it. But also […] we can embed a lot more sustainability principles into the project at an earlier stage if they’ve not already been involved. If we’re too late to the party then we’re not going to accept something that’s risky because it potentially could affect our bottom line ultimately and that’s unfortunately a big driver in a market that’s very competitive with very tight margins so […] early engagement is critical”. This type of involvement led to 80 Charlotte Street achieving BRREAM Excellent and LEED Gold, as well as achieving a 28% lower embodied carbon intensity than the RICS benchmark.

Considering the relationship between specific enablers and barriers led to the development of five actionable recommendations for industry:

Not only were recommendations for industry made but recommendations for specific practitioners were formulated. The role of the client was recognised as being important for orientating the vision and setting the tone for the collaborative process. However, architects and consultants play a critical role in pushing the sustainability agenda and fostering collaboration and interdisciplinary learning. This research forms part of the wider discussion of how the UK construction industry can advance the uptake of the CE.