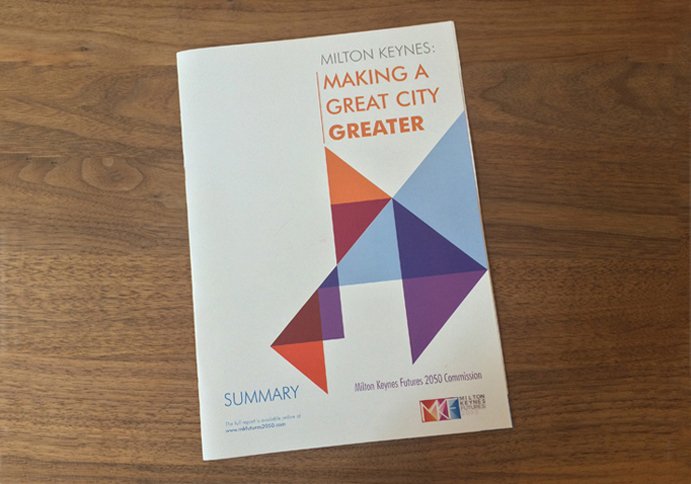 On Wednesday evening, Milton Keynes council formally adopted the recommendations of the MK Futures 2050 Commission. In an unprecedented unanimous vote, the Commission’s vision for the future and 6 key projects were fully supported by council members. Useful Projects Director Judith Sykes describes her role on the Commission and the implications for Milton Keynes.

Making a Great City Greater  is the culmination of a year’s worth of research, debate and inquiry by the MK Futures 2050 Commission to define a vision for the future of Milton Keynes. Under the chairmanship of Sir Peter Gregson, commissioners explored the strengths and weaknesses of the city today and using the Governments Foresight approach, defined several possible scenarios for its future. As part of the process, the Futures Team also engaged extensively with the businesses and residents of MK to form our recommendations. At the heart of our recommendations are 6 big interrelated projects, more of which below.

Appointed by the MK Council, the Commission includes a combination of local stakeholders and expert ‘outsiders’ with specific knowledge. My role was to champion a future for the city that promoted sustainable development in the broadest sense.

MK is a city that has been much derided. The original vision, built on the principles of the garden city to provide much needed housing in the late seventies, has been lost to a reputation for roundabouts and concrete cows. Yet as I discovered, the modernist heritage, distinctive network of green spaces, ‘red route’ cycleways and the infamous grid system are huge assets for its future development.

Milton Keynes has been identified as one of the UK’s fastest growth cities. Certainly the strategic location of MK on the Oxford-Cambridge Arc and its proximity to London, as well as its relative affordability compared with its neighbours makes it an attractive proposition for inward investment. And importantly it has the capacity for growth.

But growth in itself is not the end game. MK faces key challenges particularly around health and wellbeing, educational attainment and skills, lack of breadth of cultural offer and connectivity. Some 20% of households do not have access to a car which is very restricting for a place that has been designed around cars. Many areas of the city suffer from multiple deprivation. All of these issues were highlighted in a series of working papers prepared for the Commission by subject matter experts.

Growth does however create the critical mass to invest in better public services and infrastructure, from smarter mobility solutions to community facilities and social housing. Research submitted to the Commission also demonstrated how greater concentrations of housing and other amenities could foster a more productive economy and support greater diversity of cultural offerings. Hence the conclusion of the Commission is that growing from 250,000 residents today to 400,000 will be fundamental to creating a vibrant economy that improves the prosperity of all its citizens.

The city has capacity to accommodate significant growth within its boundaries whilst protecting the valuable assets such as the MK grid and linear parks. However, previous attempts to increase the density of the city have not been well received and, like many other places, is a political issue.

To support the commissioners in considering how growth might be accommodated, Useful Projects, in collaboration with our sister company Useful Studio, carried out research into different approaches the city might take, published in the Milton Keynes Density Report. Having set out the potential ‘density dividends’, we identified a series of strategies for selective intensification, which are required to support the 6 big projects, and, importantly, to ensure that growth is delivered along the principles of sustainable urban development.

The Commission identified 6 Big Projects that respond to the challenges identified, strengthen MK’s strategic economic position and shift external perceptions of the city.

Two of the projects focus on education; Learning 2050 will focus on raising educational attainment for all its residents with a particular focus on early years development. Proposals for a new university MK:IT will drive the renaissance of the city centre and create wider opportunities for younger people.

Having a new university is an important move to place MK at the fulcrum of the Oxford-Cambridge Arc. Upgrades to the East West Rail Services and an upgrade to the A421 are top of the agenda for the National Infrastructure Commission. Securing investment for this infrastructure upgrade will enable MK to take advantage of its strategic location to stimulate inward investment and generate a diverse range of employment opportunities.

Smart shared mobility will build on innovations coming out of the MK based Transport Systems Catapult. The essence of this project is about connecting people in new ways and ensuring all MK residents have access to services, employment opportunities and cultural offerings.

Which leads neatly to the last project, the creative and cultured city. To be launched at next years 50th Anniversary of the city, this project builds on MK’s spirit of innovation. Enhancing the cultural offer is an important factor in attracting businesses and people into MK and creating opportunities for all of its residents.

In delivering these 6 big projects, the council will need to look for new models of leadership and partnership working which engages fully with the citizens of MK. Building consensus on how the vision can be achieved will be important to its achievement and is no mean feat.

The council has already taken the first bold step in establishing the Commission. It is incredible, given the divergence of views at the outset of the process, that we have set out a vision and a programme that is backed by all commissioners and the leaders of the three main parties in MK. Moreover, as Oliver Dean pointed out, through extensive community engagement throughout the Commissions work, the vision also reflects the desires of MK residents.

MK has already established a precedent for other cities on how to set out a clear strategy for its future, and importantly how this can be used to secure a new deal with central government. Our task as Commissioners may be complete, but all of us have become emotionally invested MK’s future.