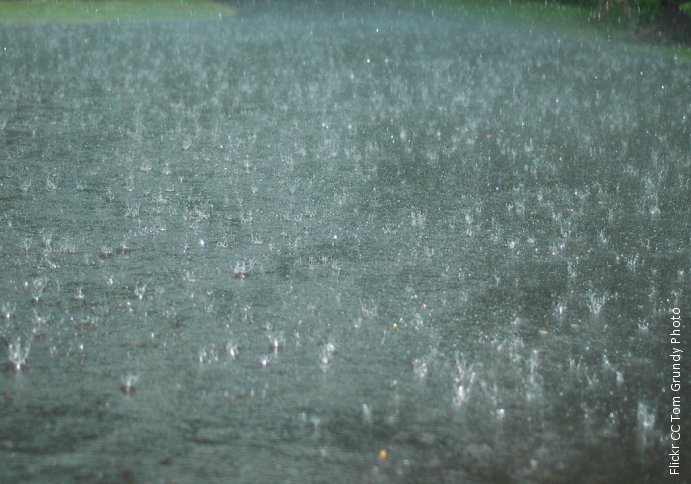 What is the best way to capture and use rainwater that lands on our hard surfaces?

Above photo by: Tom Grundy. Licensed under Creative Commons.

The answer seems obvious, so when clients ask us whether or not they should invest in a rainwater harvesting system, instinctively, I want to say yes. The arguments in favour of using rainwater as a substitute for potable water in toilet flushing, washing machines and outside taps and are quite persuasive:

However, the message from UK planning documentation is mixed. If you were to assess a new building under BREEAM you would find it difficult to get full points under the issue “reducing consumption of potable water” without using an alternative supply to meet some of the demand. The London Plan places “storing rainwater for later use” at the top of the hierarchy for sustainable drainage options, but when it comes to water supply, only advocates rainwater harvesting when it is “energy and cost effective”. So, are rainwater harvesting systems cost and carbon effective and do they really help to alleviate flooding and water stress?

Rainwater harvesting systems can be expensive to install.  A large proportion of the cost is in the underground storage tank. The bigger it is the more expensive. Equally, the bigger the tank, the more water is collected and money saved from water bills. However, mains water is quite cheap at roughly £1.2/m3 for the average consumer. On most systems we have looked at, the savings on water bills do not pay back the initial capital cost within the lifetime of the system. Even if the cost of mains water were to increase by 8% year on year, as in the worst-case prediction by OFWAT, the whole life cost of most systems would still be higher than using mains water.

Dealing with surface water runoff at source is becoming increasingly important as the UK begins to suffer from more severe flooding and rainwater harvesting is often advocated as part of the solution.

In reality, some of the rainwater harvesting tanks within a catchment area will be empty or partially empty at any one time. At macro level, this will contribute to reducing flood risk. However, the overall contribution is hard to measure and unlikely to be a resource or cost efficient way to control flooding.

The impact of rainwater harvesting systems on water stress and local hydrology is heavily dependent on context. For example, in London during a heavy rainfall event, a significant proportion of the rainfall volume is discharged directly into the Thames and does not necessarily recharge local natural water resources. In this case harvesting rainwater could help to hold a greater proportion of rain from heavy storms and hence reduce the stress on the local natural water resources. This would be beneficial in a dry period. However, during a small rainfall event, rainwater harvesting could divert water away from the natural water systems and potentially have a detrimental impact on biodiversity.

Judging rainwater harvesting systems on their potential to reduce consumption of potable water alone is simplistic. Just as each system should be designed to meet the needs of an individual project, each system should be judged on their whole life cost and environmental performance and this is very context specific.

Situations where storage can be provided cheaply and with low embodied carbon such as in a pond rather than an underground tank or where the rainwater requires minimal treatment and pumping before use such as in water butts and irrigation systems will be more favourable than conventional buried tank systems used to flush toilets.

As things stand in the UK, improvements in pump performance, pump controls and costs will be needed before rainwater harvesting earns its reputation as being a sustainable solution in any context.