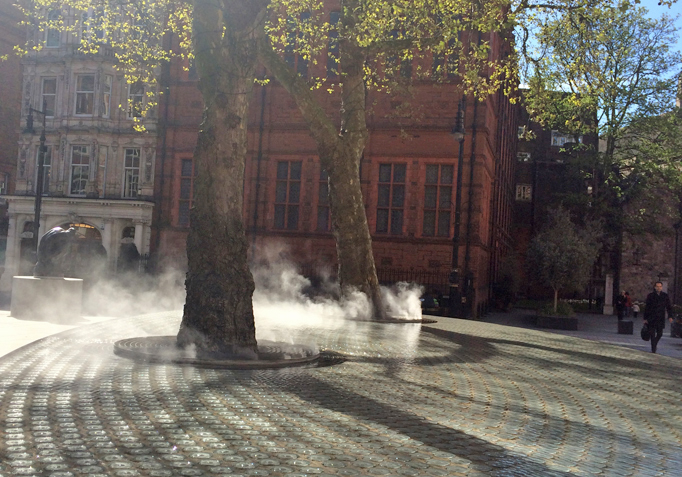 Above photo by: Useful Simple Projects.

A week on from Green Sky Thinking 2016, Carrie Behar reflects on her experience of this year’s events.

At the Useful Simple Trust we are passionate about blazing a trail in the integrated, intelligent and ethical provision of the human environment. With that in mind, we set out to attend a broad range of this year’s GST events to share our thoughts on how London’s sustainability agenda is being delivered and some of the challenges we are grappling with in our work.

Where next for housing?

Housing was a key topic at ‘Beyond the Bonfire’ a workshop hosted by Max Fordham to discuss the challenge of providing sustainable housing in a post-Code for Sustainable Homes era.

A key concern  was how the withdrawal of the Code for Sustainable Homes could widen the gap between development in London and the rest of the country. The London Plan sets out the ambitious target for an overall reduction in London’s carbon dioxide emissions of 60% (below 1990 levels) by 2025. Specific targets relating to buildings are to incrementally reduce carbon dioxide emissions, so that residential buildings are ‘zero carbon’ by 2016, with non-residential  by 2031. However, local policies outside of London are less consistent or far reaching.  Therefore, while developers and housing providers working in the city must still meet best practice in design for minimum energy use, outside of London this is less likely to be the case. Whilst Part L remains  a minimum standard for energy, the loss of the Code could lead to other aspects of sustainability, such as water, air quality and biodiversity, being side-lined.

Useful Simple Projects Researcher and EngD candidate Kell Jones also gave a compelling pitch about the importance of considering the embodied carbon associated with construction. He argued that with no incentive for the mass housebuilding industry to move first and adopt new and lower carbon materials such as cross laminated timber (CLT), the only way to push industry forward is to introduce regulation for incremental improvements in embodied carbon targets, in a similar manner to Part L.

The importance of inclusive Placemaking

A lively debate ensued as we discussed the importance of considering children in design of housing, in relation to outdoor play, security, accessibility and infrastructure. Our ‘pioneering’ goal was to design places which anyone from the age of 7 to 87 can navigate comfortably and safely as both younger and older people are currently often overlooked in new housing schemes, despite forming a large part of our demographic (children and people aged 65 or older comprised 40% of the UK’s population at the time of the last census in 2011). The discussion highlighted the need to embed children’s and older person’s requirements in the design brief. This is something that we are thinking about in our work in Hartlepool where we are advising on the development of an exemplar sustainable housing development for vulnerable members of society.

Over at Grosvenor’s ‘Living cities’ event we saw how Grosvenor are at the helm of this, leading an engaging tour around their Mayfair estate, which took in several of their successful Placemaking initiatives. Tadao Ando’s fountain on Mount Street was a great example of stunning modern design enhancing an elegant streetscape of Victorian mansion blocks. The tour also visited Mayfair’s first PassivHaus retrofit and the recently revived rooftop public realm in Brown Hart Gardens. Evident from this event was how Grosvenor’s long term relationship with the local communities enables them to act as custodians of sustainable places. The tour also demonstrated the successful juxtaposition of different social groups, with the Peabody social housing in Brown Hart Gardens only a stone’s throw from high end department store Selfridges.

Having worked with Grosvenor in setting their sustainability goals for the Living cities programme, it was good to see how these values both reflected historic approaches, and set more challenging aspirations for the future development of their London estate.

How dense should London go?

Mae Architects captured current thinking around sustainability with a series of engaging short talks on the relationship between housing density, health and wellbeing under the title ‘Hellbeing or Wellbeing?’ The idea that there is such a thing as too much of a good thing was put forward, followed by the suggestion that mid to high density (60-350 dwellings per hectare), epitomised by our traditional terraced housing and mid-rise mansion blocks, was the way forward, with some scepticism about the long term sustainability of ‘super density’ (500+ dwellings per hectare). Some may be surprised to learn that residential density in London is actually declining (in terms of units per hectare).

This discussion also came back to the importance of place, this time in relation to the role of density in enabling good places, and of the positive psychological and physiological effects of place on health and mortality. In contrast, non-places, such as the very transient spaces of subways and alleyways, create negative effects such as isolation and disconnectedness.

Overall it seems that the thread uniting these three talks was people’s need to inhabit places, and not just spaces, in order to feel connected with their local environments. It is encouraging to see the discussion moving in this direction, and let’s hope that some of the energy shared during the week’s events can be harnessed to bring about positive regeneration across our city and beyond.