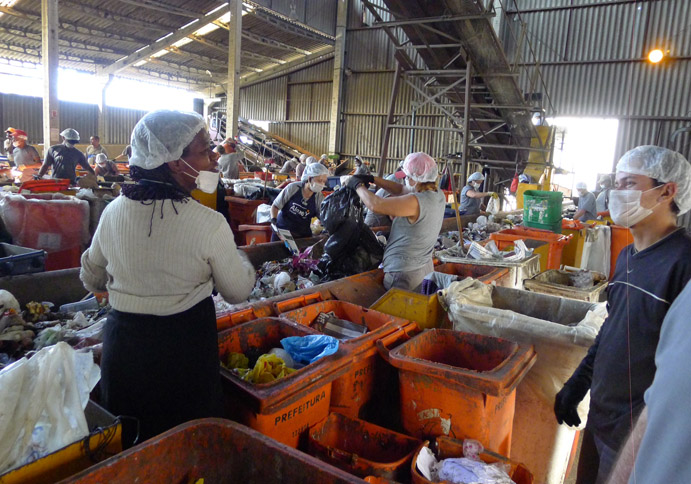 Over the last year, Useful Simple has been partnering with ICLEI Brasil to stimulate more sustainable waste management in three Brazilian cities, using the upcoming mega sporting events as a catalyst for change. This, at a time when new national policy frameworks are transforming the country’s approach to its growing waste mountain.

Whether next week’s World Cup has acted as a catalyst for change is debatable. Recent public protests, strikes and construction delays have certainly catapulted higher priority issues to the fore, leaving sustainability rather languishing on the ‘to do’ list. The damagingly timed strikes in Rio by the city’s rubbish collectors during Carnaval this year may be a portent of things to come and is undoubtedly why the Mayor nipped them in the bud with a 37% increase in pay offer. So in reality, as long as each host city can keep the streets and venues clean during the events, that will be seen as an achievement.

While the World Cup and Olympics are throwing public officials into a state of myopia, it’s worth mulling over some of the challenges that once the events are out of the way, might be back on their minds. Three in particular kept coming back at me.

During our project, it was institutional issues more than anything else that seemed to hold up progress. One key learning during the 2012 Olympics, was the need for a shared vision and aims around sustainable waste management, involving a wide range of different organisations and stakeholders. A collaborative approach, as well as taking advantage of the resources and expertise of different players, meant that the Games was able to provide a consistent experience and set of messages for employees and the event public.  In Brazil, getting the key players around the table was difficult. This, combined with the existence of overly hierarchical structures tended to result in decisions being made in silos, or not made at all. An institutional fog seems to cloud the leadership needed to plan sufficiently in advance and then move forward at the required pace.

Which probably explains why at a local level, municipalities have a lot of catching up to do to meet new national waste regulations – such as increasing recycling – which will require more institutional capacity to successfully involve the private sector, other public agencies and civil society. And none of this is helped by the uneasy relationship, at least from what I saw in Rio and Recife, between the municipal government and their incumbent public sector waste contractors. Without a genuine arms length client/contractor relationship, the city urban cleaning contractors are at liberty to operate without transparency and to their own rules.

A second important issue is whether the poor and marginalized waste pickers (catadores) of Brazil can be successfully integrated, as the law requires, into more formalized waste management structures. Currently waste pickers and their cooperatives are responsible for diverting more material for recycling than anyone else whilst providing livelihoods to some of the most vulnerable. It is right that they have a prominent future role in the country’s waste management, but should waste professionals be expected to act as social workers and teachers as well? Many waste pickers work independently, others at widely varying levels of organization in worker cooperatives. Municipalities are starting to develop contractual arrangements with them, but often with mixed success. In Recife we found co-operatives understandably reluctant to enter into contracts, when previously they had been given support and equipment by the municipality without any requirement to meet minimum performance standards. And despite a plethora of courses tackling illiteracy and basic business skills, many waste pickers prefer to scrape a living on the margins, rather than risk losing what little control they have over their lives.

And as municipalities build more materials reclamation facilities in their attempts to meet challenging recycling targets, the role of worker cooperatives may also be reducing plant efficiency at the expense of cheaper mechanized sorting solutions. Clearly there is a balance to be struck here between mechanization and hand sorting, but it is also a question of how waste pickers and their cooperatives can be incentivized to take new roles across the sector; not only in sorting centres, but in waste collection and in the material transformation industries of the future.

As I have shown, one of the big challenges to providing effective public services in Brazil – waste or otherwise – is a cultural one. The country may now be 30 years out of its dictatorship, but mechanisms for public engagement are still in their infancy. This was slightly better in Rio and Sao Paulo with new civil society organisations starting to influence public policy and hold the executive to account, but in Recife there seemed to be virtually no conduits within local communities for people to even complain about service provision. This disconnect between services and users acts as a real brake on creating dialogue, gaining support for new initiatives and finding innovative solutions to urban problems.

Littering and fly-tipping is one expression of this. Brasilian cities are often dirty and levels of civic pride pitifully low. In Rio, famed for its beaches and natural beauty, armies of rubbish collectors scour the beaches every day collecting detritus left by the sun worshipping Cariocas. In 2013, the Mayor of Rio rushed in his flagship zero tolerance anti litter campaign ‘lixo zero’, giving on the spot fines to litter louts in an attempt to spruce up the city in time for the World Cup. Using the stick may be necessary, but investment in longer term programmes of public education involving civil society also need to be resourced.

Brazil is a huge country that suffers from a historic dearth of investment in infrastructure, education and skills. As its economy develops, the competing demands on the public purse for better services are becoming intense. The ambition to develop a modern waste management industry is certainly there, but getting the institutional machinery and cross sector collaboration in place at a local level to deliver it will require a lot more work.